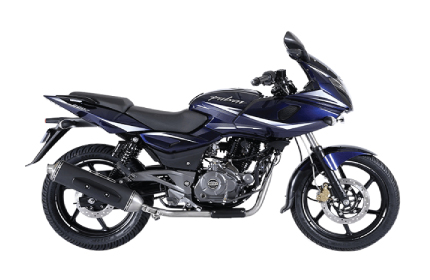 The Bajaj Pulsar 220F is a performance-centric bike ruling the streets of India. It is one of the most popular choices of many in the country. Several people look for the Bajaj Pulsar 220F for it being sporty, macho and high on performance. The bike has not seen an update since 2008. However, the fuel-injected engine was replaced by a carburetted version. Meanwhile, the looks do not differ.

The bike is known for being a highly efficient performer. The Bajaj Pulsar 220F comes with a 220cc DTS-i engine, which delivers a power of 21 bhp and 19Nm torque. Thanks to its features, the Pulsar 220F is one of the fastest bikes in its segment.

The Bajaj Pulsar 220F is available in three colours, that is blue, black and red. Due to its features, specifications, and affordability, the bike is a straightforward option for many Indians. Some of its competitors include Yamaha Fazer, Suzuki Gixxer SF, and Hero Karizma.

Bajaj has equipped the 220F with the 220cc DTSi motor which was carburetor-fed. This was an added feature added in comparison to its predecessor Pulsar 200 DTSi. The bike is lighter due to the exclusion of hunky headlight, heavy fairing and some different body parts that weighed down the 200 DTSi.

However, this may be making or breaking point for the bike. Someone who has never ridden the Pulsar 200 would absolutely fall in love with it, its design and its conduct. But people familiar with the older gen model will miss the iconic handlebars and the ergonomics of the bike that was its identity.

Besides that, the Bajaj Pulsar 220F has got a lot going for it. The rear disc brake, thick forks, two-piece handlebars make this bike distinct. These features help it to gain quick speed and stable setup. Its reliable features assist in a fast ride on highways while being entirely in control. It feels a lot more stable facing bumps and obstacles on the road.

The significant benefits of buying a Pulsar 220F its right on the money cost, its top speed which is hard to beat in its segment, the acceleration of the bike is better than most of its competitors and added features that make appealing.

However, there are drawbacks to the bike, which frequently include vibrating engine, rigid gearbox, and mediocre finishing. Despite the problems that hold back the Pulsar 220F, the bike delivers an effortless and convenient ride, which suits an on road and off road experience.

Riding a bike can be thrilling, convenient, efficient, and time-saving, but with all the facilities comes a little added risk. Riding a motorcycle can be more dangerous than other forms of transportation. Any harm to the bike can be expensive to mend. However, with a bike insurance policy, all the physical damages to the bike can be saved.

The Indian government has made bike insurance a mandatory document that every bike possessor must have. Therefore, buying the right insurance policy is most important. This is where Royal Sundaram comes in.

Royal Sundaram provides comprehensive coverage for the owner’s two-wheeler, accessories, third party property damage. No claim bonus won’t become nil when a claim is made during the currency of the policy.

With that in mind, make sure to not miss out on the many benefits of a Royal Sundaram policy.

A body set up by the government of India, Regional Transport Office, or RTO is an organization that deals with providing registration for cars, bikes, and every other vehicle. The body is responsible for delivering registration license to the vehicles and grant driver license.

It is compulsory for every vehicle owner to get a registration card issued by the RTO to make their automobile legal.

The owner first needs to get a temporary registration issued by the dealer. However, this registration is valid for a small period. It has to be followed by a permanent registration that is provided by RTO.