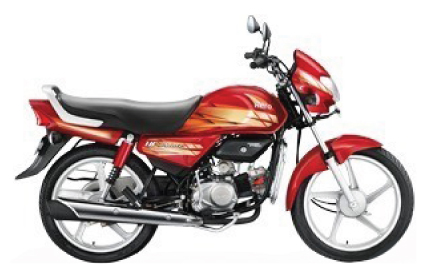 The Hero HF Deluxe is the second most cost-efficient offering from the brand Hero MotoCorp.

After ending its long-time joint venture with Honda back in 2010, The Hero MotoCorp re-branded the existing Hero CD Deluxe to Hero HF Deluxe.

Irrespective of being easily affordable, the Hero HF Deluxe offers electric start and provision for alloy wheels as options. Moving on to power, The Hero HF Deluxe is run by a 97.2 cc air-cooled four-stroke OHC engine. The engine of this bike produces 8.2 bhp power at 8000rpm and 8.05Nm torque at 5.00 rpm. The motor of Hero HF Deluxe is mated to a four-speed gearbox. The fuel efficiency and mileage of 82kmpl are claimed by the Hero company. Other bikes that compete fiercely with the Hero HF Deluxe are TVS Sport, Bajaj CT 100, and Honda CD 110 Dream.

Hero HF Deluxe is updated with the Hero trademarked IBS (Integrated Braking System). This update is available in both i3S and standard bike variants.

Being an affordable yet fuel-efficient bike, the prices of the brand-new Hero HF Deluxe commence at Rs. 39,000/- for the lowest variant comprising a kickstart and spoked rims. The top variant is priced at Rs. 48,000/- and consists of self-start, alloy wheels, and linked brakes. (ex-showroom, Delhi).

Below mentioned are the ex-showroom prices of all the variants of Hero HF.

Driving the HF Deluxe is the very same air-cooled 97.2 ccs single-cylinder engine that powers the Hero HF Dawn. Peak power achieved is 8.35PS with the help of 8.05Nm maximum torque and it has a 4-speed manual gearbox. The optimum fuel economy is possible due to the modern i3S system. This system automatically cuts-off the engine when vehicle is idle for 5 seconds. Later on, the engine is restarted automatically the second you pull the clutch lever. The work of braking is significantly managed by 130mm drum brakes that are installed on both sides and assisted by IBS.

IBS splits the breaking force amidst the rear and front tyres equally, even if the rider applies only the rear brake, thus aiding the bike's overall stability.

However, the Hero MotoCorp has put in efforts to make the look and feel of HF Deluxe more premium and modern as compared to the Hero HF Dawn. This bike now offers better features, unique looks and an economical 100cc petrol engine at a very affordable price range. The motorcycle is endorsed with sporty graphics, alloy wheels, and bold grab rail at the rear for styling purposes.

More prominent bike features comprise of a twin-pod analog console and a new and upmarket-like fuel tank cap which looks dazzling with the fuel tank. Apart from these, the bike also comes fitted with 'Hero's trademarked i3S and IBS technology for added reliability and comfort.

With Royal Sundaram insurance policy, an insured individual can avail and enjoy a quick claim settlement in just ten working days. Moreover, the comprehensive coverage insurance policy from Royal Sundaram Insurance Company renders a claim for the bike, damage to third party and accessories. Also, the insurer can avail up to Rs. 15 lakh in accident coverage.

In India, the Regional Transport Office a.k.a. RTO is accountable for registering and preserving a record of each vehicle running in India.

Once you purchase a new scooter or a bike, it is obligatory to register it with the RTO before you start the daily commute.

Once you buy your new vehicle, you get a number assigned to your vehicle at that moment. This number indicates that your vehicle is not yet registered permanently. This number is valid only for a short amount of time, and you must apply for a permanent number.

On successfully registering your new vehicle by the Ministry of Road & Highways through your local RTO, you will receive a permanent number.

Listed below are fierce competitors of Hero HF Deluxe. Check them out before making a decision.