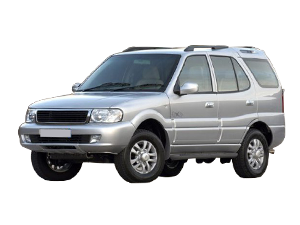 Tata Motors is one of the most trusted automobile brands in India, and its oldest and trusted model is “Sumo.” Tata Sumo, launched in 1994, is the earliest MUV and SUV introduced in India. Sumant Moolgaonkar was a remarkable person who made significant contributions to Tata Motors, and the name ”Sumo” is a tribute to him. Sumo is also a derivation of the Japanese wrestlers which symbolizes the sheer strength, size, and power of the vehicle.

It was initially designed as a ten-seater jeep for urban, rural and military uses. A plain exterior design and clutter-free spacious interiors are its major asset. When launched, Tata Sumo was a major hit among consumers with army, police, government, private sector all lining up to buy the car for its people mover capacities.  It became the symbol of the new middle class of the 90s who bought “Sumo” as their first big car purchase.

Tata Sumo was revamped in the 2000s with the rebranded Tata Sumo Victa, followed by the Tata Sumo Gold. The latest redesigning came with Tata Sumo Grande; however, it was renamed as Movous.

The ex-showroom Mumbai prices of the variants are as follows –

*The prices are subject to change.

The exterior design of the car is simple and even boxy, but this accentuates the strong muscular built of the vehicle. The five-door frame has square shaped headlamps and front grill. The side profile is flared and has large alloy wheels. The powerful yet simple design gives strength, stability, and endurance to the car.

Just like the interiors, the makers of this car made the interiors plain and simple. This ensures that Tata Sumo has one of the most spacious and clutter-free interiors among the current competition. The seats are comfortable and accommodate seven people. Some variants also have a nine-seat layout. The dashboard and console are clean.

Tata Sumo is a power-packed, stable, and robust car that ensures a safe driving experience. Make your Sumo experience more reliable and hassle-free by purchasing a Royal Sundaram Car Insurance.

Royal Sundaram Car insurance is one of the most reliable car insurance in the Indian market. When you buy our car insurance, you are protected against loss, damage, and any damages caused to a third-party by your car. Our policies give you a host of coverages including, personal accident cover to the owner of the car, cover for the paid driver, and also a comprehensive coverage to all the occupants of your car. We also have best-in-class additional features like 24*7 free roadside assistance at the time of emergencies and even free emergency fuel delivery.

As per the Motor Vehicles Act, 1988, it is obligatory for all the motor vehicle drivers to get their cars registered. In India, the Regional Transport Office (RTO) makes sure that every motor vehicle plying on the roads has been registered.

Here are the documents required to register a vehicle:

A fee has to be paid while getting the car insured. The owner driver should carry all the documents in original and 2 copies along with the applicable fee to get the vehicle legally registered.

Tata Sumo is the oldest, most trustworthy, and powerful car brand in its segment. However, it faces competitions from several modern iterations of SUVs and MUVs like –