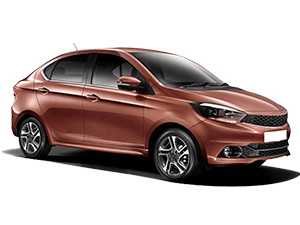 Tata Motors has been the champions of sub-four metre car segment in India. Building and improving on the Tiago specs, they have introduced Tata Tiago in 2015 which was recently updated in 2019. Known as Tiago’s elder sibling, the Tigor has a wheelbase stretched by a full 50mm. The hatchback, or “styleback” as it is often called, looks small but packs amazing space into its design. The boot can accommodate a full grown adult. It takes all the top features of the Tiago and a layer of understated practicality to it. It is the perfect choice in its segment with the ideal balance between sensibility and flair.

Tata is offering five new variants for the Tigor – XE, XM, XZ, XZA, and XZ+. The XZ is an AMT-based improvement upon XZ in the petrol variant. The company is also offering a JTP version to cater to the adventure enthusiasts.

Unlike many of its competitors, Tata Tigor offers a comprehensive set of both petrol and diesel variants.

*The prices are subject to change.

The Tigor has a ConnectNEXT infotainment feature in all its variants with an immersive surround sound 8-speaker system. It has been revised with features like Android Auto, Apple Car Play, and Mirror Link.

Make the Tata Tigor experience more reliable and comfortable by purchasing a Royal Sundaram Car Insurance for your car.

It is imperative to buy insurance for very vehicle for it to ply on Indian roads. Royal Sundaram makes the process of buying insurance for your car a hassle-free experience. Royal Sundaram Car Insurance provides one of the best and trustworthy insurances policies for your car. Its comprehensive coverage insures your car against theft, loss, damage, and any financial liabilities caused by damage to any third-party vehicle.

The Regional Transport Office regulates all the registration of vehicles in its district. The Motor Vehicles Act of 198 makes it imperative for every vehicle owner to get their car registered at the district level agencies called the RTO.

Here are the documents required to register a vehicle:

The RTO also charges a pre-determined fee for the service. You will need to provide the original documents along with their photocopies to get the vehicle registered.

As Tigor is the most affordable sedan in the segment, it rivals the likes of -