The famous brand of motorbikes today, Kawasaki, was once a ship building company. Established on 15th October, 1896, the headquarters of Kawasaki are situated in Japan. The founder of this most sought-after bike company was Shozo Kawasaki. Initially, the bikes were sold with the brand name, Meguro Works. However, in the year, 1963, Meguro and Kawasaki aligned together to form Kawasaki Motorcycle Company. Ltd.
At present, Kawasaki comprises a group of around 100 companies in Japan and other countries across the world. The technological capabilities of Kawasaki date to more than a century. One of the most popular bikes manufactured by Kawasaki was the 650W1 sport bike with 600cc engine in the year, 1981.

Kawasaki has always aimed at manufacturing motorcycles that deliver high performance. The company is recognised world over for leading motorbikes such as Ninja, Vulcan, Z-series and many others. Moreover, the company also participates at a global platform in bike races and have many winning titles credited to their list of achievements. The inception of Kawasaki was in India with the popular Indian bike brand, Bajaj in the year, 1986.

Bajaj and Kawasaki worked in collaboration with each other, sharing the technical knowledge to manufacture the brilliant 2-stroke motorcycle which was called as the Kawasaki Bajaj KB 100. After this, another variant, KB 100 RTZ was introduced in the market with the tagline of ‘Own Cheeta’. It was a huge success in the Indian market and added to the crown of both the manufacturers.
After a little shift in the launches of made-for-India, Kawasaki chose to withdraw their name from being associated with Bajaj brand despite the consistent transfer in terms of technology between both the motorcycle giants. At present the most successful bikes offered by Kawasaki in India include the Ninja series. Currently, the products sold in India include Ninja, Z, Versys, ER, and KLX. The distributor of these bikes is Bajaj Pro-biking network. Ninja 650R, Ninja 300, ER 6n, Z250, Z800, Z1000 are some of the most popular Kawasaki bike models in India.

To protect your brand new bike from any kind of untowardly events or accidents, Royal Sundaram provides comprehensive bike insurance policy for Kawasaki motorbikes. From basic cover to pay for the losses to speedy claim, this two wheeler insurance plan is the perfect safety net for your Kawasaki. 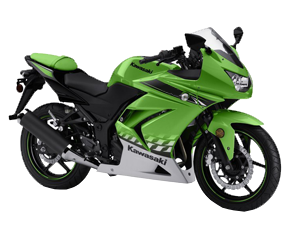 Why a Kawasaki Bike Insurance Important for you?

If you love your Kawasaki, then it’s your responsibility to take good care of it. Therefore, it’s good to invest in a bike insurance as it protects your bike from all sorts of possible risks. It not just protects you from third-party liability but also ensures a safe ride every time you hit the road. Also, it provides financial protection for your bike against any type of unforeseen situation, including loss or damage to your bike or third party.

You can purchase insurance for a brand new bike for a time period of 2-3 years. As per regulation 5 year TP is mandatory for new vehicles.

The settlement of claims will be done within 10 working days.

It offers comprehensive coverage for your bike, accessories, and any damage to the third party property and life. Also, you can get the cover of up to 1 Lakh in case of accidents

Owner-Driver cover up to 1 lakh in accident cases

In case your bike meets an accident, you get an owner-driver cover of up to 1 Lakh

First, you can inform Royal Sundaram about the loss of or damage to your vehicle through our customer services number 1860 425 0000 or email (customer.services@royalsundaram.in). Make sure to keep your policy number handy when you call or mention your policy number when you write to us.

We will assist you in finding a workshop where quality repairs will be done for your vehicle. Before starting the repair, we will arrange for the vehicle to be inspected by our surveyor.

You will need to submit a duly filled and signed (only by insured as per policy) claim form, self-attested photocopy of the registration certificate of the vehicle and the driving license of the person who was riding the vehicle at the time of accident.

Other documentary requirements and process will be explained to you after inspection of vehicle.