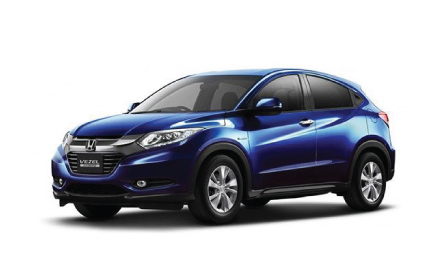 We will be covering the following:

Sometime back, Honda released a new car at the Tokyo Motor Show. This car was Honda Vezel, and now it is slated to be launched in the Indian market later this year. Honda designed this compact SUV to meet the new consumer demands of owning an SUV with practicality.

It will be entering the market where it will find itself battling it out against the likes of Renault Duster and Ford EcoSport, two competitors which have already established themselves in the Indian market. Honda is promising that it would be spacious and will be a step higher than its opponents.

It is expected that the Honda Vezel will be loaded with G-Force Control Technology (G-CON), Electric parking brake and City brake active system. The quality of the inside part of the car will supposedly be the best in the class. Honda is promising that the Vezel's 1.5-litre i-VTEC will be delivering a mileage of 13 kmpl. Meanwhile, the 1.5-litre i-DTEC version is expected to deliver 18 kmpl in city and 23 kmpl on highways.

Since the car has not been released in the Indian market, the exact price is yet to be determined. However, the speculated price range is between Rs. 10.00 – 15.00 Lakh.

The Japanese manufacturer is promising that the Honda Vezel will be a class apart. Based on their previous cars, it can be believed that the dynamics of driving, interior and exterior is going to be top notch. From the images released, the Honda Vezel looks sharp and sophisticated. But its similarity to the Honda Jazz is undeniable. Even the interior derives its design from the CR-V and Jazz. The cabin seems exceptionally high class and comfortable.

Honda Vezel will be offered in the 1.5-litre petrol and 1.5-litre i-DTEC diesel engines with two-wheel drive (2WD) option. On the safety front, the Honda Vezel is supposed to have safety features like Electronic Brake Force Distribution, Anti-lock Brake System and Automatic Brake Hold.

From the initial impression, the Honda Vezel looks like it is going to dazzle the Indian market on its entry.

Getting a vehicle registered from the Regional Transport Office is mandatory. RTO is the authority that deals with keeping a tab on vehicles and drivers.

The body deals with providing a variety of services; however, their primary offering remains vehicle registration.

Make sure that the following documents are in order as they are necessary for a car’s registration:

The registration fees for a vehicle differs from state to state.

A car is one of those few priced possessions of an owner; it fills them with pride. The feeling of this association is an extremely great feeling. Any damage to the car is emotionally stressful. However, it doesn't have to be an agent of stress on the pocket.

However, it is something that can be avoided by purchasing car insurance. Royal Sundaram is one of those companies that provide insurance policies specifically customised for Honda cars.

Below are some reasons why a Honda owner must buy a Royal Sundaram policy: