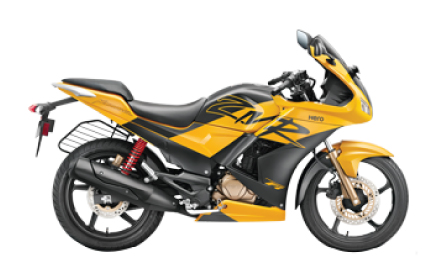 The Hero Karizma ZMR is a flagship motorcycle from Hero. Hero Karizma ZMR was initially revealed solely as Karizma in the year 2003 and has been in the bike markets in India in several avatars until the year 2016. Hero Karizma was discontinued in 2016. Now, the Karizma has been recently relaunched in a BS-4 variant. However, the stylish looks continue to be the same as the previous version of Hero Karizma. It is evident that the design was not entirely appreciated in the market, but Hero desires to raise the sales through value and an extensive sales network.

Hero Karizma rocks a 276mm front disc, a 220mm rear disc, and a single-channel ABS for durability and stability. Hero Karizma received a fully-digital instrument setup and other features like LED headlamps to make sure it looks sporty. A 223cc single cylinder fuel engine drives the all-new Hero Karizma.

Given below is the price list of all the Hero Karizma ZMR variants.

The brand new Hero Karizma ZMR looks fantastic in the pictures. The vital design highlight is the vertically piled twin-headlamp. Erik Buell Racing's 1190RX sports bike has inspired this look. The all-new Karizma ZMR projects a daylight running headlamp, which is placed above the indicators. This change is enough to garner attention. Hero designers focused on toning down the proportions as compared to the older variants of Karizma ZMR. However, the front is still hefty than required as compared to the narrow tail section. This makes the bike look a bit disproportionate.

The brand new Hero Karizma ZMR is driven by an air-cooled 223 cc, fuel injected engine that produces over 20PS at 8,000 rpm. The peak torque reached by Karizma ZMR is 19.7Nm at about 6,500 rpm. The all-new Karizma ZMR uses the same precise engine as on the older variant of Karizma ZMR but now generates 2PS more power than the older version. The torque is a little bit improved as well.

It is worth noting that the performance of the all-new Karizma ZMR is to an extent reasonable. The revving motor is quick in picking up pace without any hassles. The latest variant of Karizma ZMR touches a mind-blowing speed of 125kmph. The bike reaches 0-100kmph in less than 14 secs. However, fuel efficiency remains under 40kmpl in day to day riding conditions. Karizma ZMR comes with a 15.5-liter fuel tank and touches 600km on a tankful of petrol. This bike is majorly appreciated by people who love touring long distances.

In India, buying an insurance policy for your vehicle is compulsory and failing to purchase insurance levies hefty fine. With several motor insurance companies available in the market, choosing the best one that covers all your requirements becomes difficult. This is where Royal Sundaram comes to the rescue. With the kinds of services provided by Royal Sundaram, it makes choosing well-suited insurance easy and hassle-free. One can buy insurance with coverage for two to three years. While claiming the insurance, an insurer can claim for settlement in ten working days. Royal Sundaram offers comprehensive coverage for bike and third-party property and life.

In India, the Regional Transport Office (RTO) keeps a check on every vehicle operating in India. Scattered across multiple areas of India, RTOs offer broad types of services related to vehicles. However, one of its essential functions is vehicle registration.

The primary job of the Regional Transport Office (RTO) is to keep a check on all the vehicles running in India and to issue driving licenses. Without their permission, a bike can’t be used for commute in India. The offices of RTO are available in many parts of the country.

Registering a bike with RTO is compulsory. The process is divided into two steps:

Here is the list of documents that are required for registration:

Given below is the list of competitors of Hero Karizma ZMR. Compare to see who fares well before making a purchase decision. The below given prices are on-road New Delhi prices.